by EuropeanVisualArtists on November 29, 2017 in News, Resale Right America 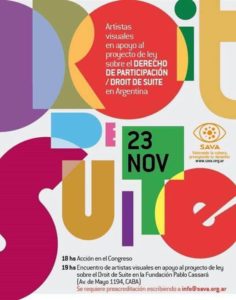 On the 23rd of November SAVA, the Argentinian authors society, organized in Buenos Aires a gathering of visual artists in order to support the campaign for the recognition of the Resale right in the country’s legislation. Argentina does not recognized Resale Right until today and SAVA’s awareness campaign has as a goal to support and promote the insertion into the country legislation of this fundamental right that gives authors a percentage on the resales of their art works, that is normally traded through professionals such as art galleries and action houses. SAVA organized a performance calling on the government to support a bill already approved by the Senate.

The concerted efforts are to support the bill pending in the National Congress of Argentina. If the pending bill is not approved by the Chamber of Deputies or even slightly modified by the end of 2017, it will be sent back and have to start anew despite two years of progress.

An artist performance took place in front of the Congress, as well as a panel at the Fundacion Pablo Cassara. Visual artists and their heirs, media attended, as well as Senator and National Senate Human Rights Observatory Director Norma Morandini.

Former CIAGP President and French visual artist Hervé Di Rosa as well as CISAC Vice President Miquel Barceló are some of the internationally recognized visual artists who, have actively supported Argentina’s quest to adopt the resale right into law. 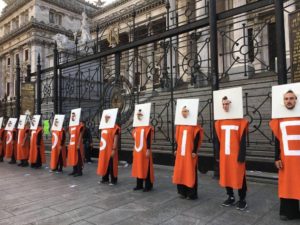 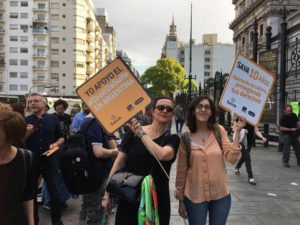 The resale right grants visual artists a percentage of the sale price when their works are sold in auction houses or galleries. Today, it exists in more than 80 countries, but many artists are losing out in countries where the right is not implemented into national law, such as the United States, China, Switzerland, Japan and Argentina.

SAVA is counting on the support of the international community on this effort and is also supporting the insertion of Resale Rights in the USA, China and Japan.